NextLuke 15:11-32, Lessons from the Parable of the Prodigal Son
Biblical Hebrew Word Studies

One of my chief goals through this website is to teach you how to learn. One of my desires is that each follower of Yeshua would be capable of learning the biblical meanings of words on their own. When I first started to look into Hebrew I was a bit overwhelmed. But as I took baby steps I realized that much of what I learned confirmed things that the Spirit of God had taught me through reading the Bible! This process encouraged me to dig deeper into the Hebrew language. While I am not yet where I want to be, I have gleaned so many important lessons from just starting the journey of studying Hebrew. Believe me, I am no Hebrew scholar, but this God-designed language has enriched my understanding of the Word of God ten-fold. Let’s look together into the ideas of transliteration vs. translation and attempt to answer the question, should a believer study Hebrew words?

Transliteration and Translation: What’s the Difference?

Etymology is “the study of the origin of words and the way in which their meanings have changed throughout history” (Oxford Dictionary). After reading that definition, do you think it is important for believers to have some understanding of the origin of the English bibles we read today? Absolutely! Listen, translating is tough work! Translators make mistakes and all translators agree that it is impossible to translate without super-imposing personal beliefs and bias into the translation. So it’s important that we all have some basis for being able to test certain translations. You will come to find that sometimes, one inserted comma or mistranslated word can change your entire theology, literally! So let’s look into two common practices that will help you start understanding and studying biblical Hebrew words!

Firstly, upon seeing the term, transliteration, think about the process of writing a non-native word in English with the intention of preserving its pronunciation. The key component of transliteration is the preservation of how a word sounds in its original language, all while writing it using the English alphabet with accompanying symbols. Secondly, when seeing the term translation interpret it as the rendering of a word with its meaning from one language to another. The key part to that sentence is the phrase “with its meaning”. A correct translation seeks to preserve the meaning of a word or phrase. Let me give you a few examples of transliteration and translation using a Hebrew word.

As you take a look at this table, notice the transliteration column. Assuming you cannot read the actual Hebrew text, if you sound out the word in this column you are vocalizing the word as it sounds in the Hebrew language. Pretty cool! Again, the goal of transliteration aims to allow you to pronounce Hebrew words without being able to read Hebrew. Theoretically, if I handed you a transliterated Hebrew bible, you could speak the entire Bible in its original language!

“Bereshiyt” God Created the Heavens and the Earth

Now examine the translation column. A translation is man’s best attempt at rendering a foreign word into a native language with the goal of preserving its meaning. So the first row is the Hebrew word Bereshiyt. Bereshiyt literally means “at the head of,” yet the translators made a decision to render it as “in the beginning.” While this translation doesn’t lose too much of the intended meaning, it still sacrifices textual accuracy for readability. Translating is no easy job. Every word and phrase requires a compromise between literal translation, readability, and cultural meaning. I included this example in the table to show an additional translation nuance. “Bereshiyt” is actually the name of the first book of the Bible in Hebrew. In English, we read Genesis, which gives the connotation of an origin or beginning. Genesis was chosen because certain men thought it carried the meaning of the Hebrew text over while still giving a one-word title for the book.

Yeshua, His Name Says it All!

Using the same methods as explained above you can work through the examples of Revelation and Yeshua on your own. I want to note on the Yeshua example the meaning of His name. English names do not intrinsically have meaning. They borrow their meanings from other root languages, usually ancient languages like Hebrew. Hebrew names inherently possess meaning due to the fact that Hebrew is a designed language, crafted by Yahweh Himself (I am speaking only to ancient and biblical Hebrew, not modern Hebrew). I’ll bring to your attention the birth of Yeshua in hopes of showing you how He received His name from God because of the function He would perform on the earth. His name was not arbitrarily chosen: it has innate value.

21 She will bear a son, and you shall call his name Yeshua, for he will save his people from their sins.”

After reading this scripture, go back to the table and look at the meaning of Yeshua. Salvation! The messenger of Yahweh tells Joseph, “You shall name him ‘salvation’ because He will ‘save’ the people from their sins.” When you start to see the beauty of the Hebrew language and the true meaning of words, you will never want to settle for anything less.

I have written an entire article dedicated to understanding the meaning of Yeshua's Name, the name above all names! 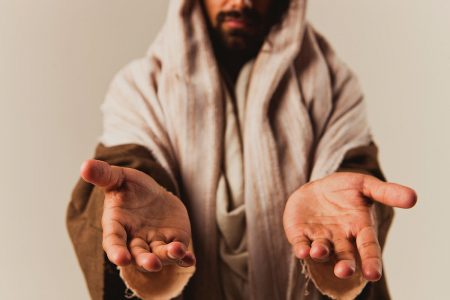 Mashiach, The Anointed One of Yahweh!

In my opinion, one of the most devastating mistranslations in the English bible is the word “Christ”. To validate my point, let me ask you a question. What does Christ mean? My guess is that you either understand it from context clues in the gospels, or you have encountered the word Messiah, or Maschiach before. The reality is, to native Hebrew speakers – Jews, the word Christ literally carries no meaning. How tragic! Most Jewish non-believers have at some point thought that Christ was simply Jesus’ last name. Ponder that for one minute. Due to the decision of English translators, the most important title to the Son of God goes completely missed by God’s chosen people.

Fortunately, we can learn from our past mistakes and change! I encourage all followers of Yeshua to adopt the usage of the word Messiah in place of Christ. In doing so, you will be much more authentic to the true Hebrew meaning of the word Maschiach, meaning “Anointed One”.

To many reading this, the prospect of studying Hebrew might seem like an impossibility. But rest assured that you do not need to become a Hebrew scholar to glean beautiful gems from this ancient God-designed language! In fact, there are numerous useful resources to help you on this journey. If you wish to learn more, maybe even take a class or two, please feel free to use some of the following links I provide. I have used each of these to some extent and have been very blessed by my time studying Hebrew.